Normally I can’t stand kyoot spellings like Kid’s Korner or Kathy’s Kwik Kuts. (Why is the letter “K” so over-represented in this awful category?). But Luvs is okay, and not just because they sponsored a giveaway. No, “luvs” is vaguely British enough to gain some respectability, and also I get that it’s a cute, marketing-friendly play on the one true spelling.

Anyway, I enjoyed reading your Things That Must Go entries. And the winner of the Luvs and Anita Renfroe DVD giveaway is:

Beth of Blog o’ Beth with the Diaper Genie. It was funny, and so true, and, though this wasn’t a requirement, on-topic. I had a diaper genie with my first, took diapers to the can outside with my second. And with the third? Eh, at least I put them in the trash (which is more than I can say for leave-’em-on-the-ground Dick). Send me your address and we’ll get this out to you asap.

Laura Williams was a close second with: “My forgetfulness. I just came home because I forgot something that I actually had with me in the diaper bag.” Show me someone who has not forgotten something they really didn’t (not?) forget, and I’ll show you someone who doesn’t have enough to think about.

Thanks to everyone who entered (and don’t forget the $5 coupon on luvs.com starting June 25).

Next Weekend’s Things That Must Go giveaway is for a $50 gift certificate to a really cool online store.

I got excited when a certain diaper company asked if I wanted to do a giveaway of a “pack of Luvs diapers featuring Bear Hug Stretch and a DVD of Anita Renfroe – a $30 value,” even after I read that the (obviously jaded) Mom-101 wasn’t over-impressed by the pitch.

What can I say? I LOVE disposable diapers. There’s nothing better than a new pack of diapers. It’s like a baby trinity of comfort, technology, and convenience. Even worse, I love to wrap a stinky diaper in a PLASTIC grocery sack and throw that in a PLASTIC trash bag and throw that in a landfill. Will future generations want to flog me? Probably. Will that EVER decompose? Who knows. Future generations probably won’t even know.

Have you heard of Anita Renfroe? Yeah, uh, me too. On YouTube, you can see Anita do her William Tell “Mom-sense.” Even better is her Dad-sense piece:

Of course, we don’t want to fall into the Berenstain Bears trap of devaluing fatherhood, but this is too funny!

So it is with a light heart that I offer you the chance to win a pack of diapers and a DVD of Anita doing her Mom-Comedy thing. And I’m offering it on the weekend (when my traffic is lower), so if no one enters, I’m pretty sure I get to keep it myself.

I will say that, besides always using Rollings Reliable Baking Powder in my house of dreams, I have often bought Luvs diapers and I like them because a) they’re better than generic, b) they’re cheaper than Pampers and Huggies, and c) unlike those evil Sam’s Club brand diapers, they don’t give my kids hiney hives.

To enter: leave a comment about Things That Must Go. I’ll give you two examples from my quick run to Blockbuster just now.

Things That Must Go

1) Clerks, especially female clerks, calling me Ma’am and telling me to have a nice evening. 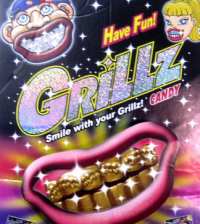 Do I LOOK thirty-five?

2) Grillz candy. When we lived in Florida, our next door neighbor had a gold tooth with the letter P carved in it. He carried around a brown paper sack that he drank from starting at 10 am. Turns out he didn’t actually live there, he just distributed drugs, which we learned after shots were fired into our house one day.

We never saw him again and later Eddie moved in. Eddie was a nice guy, and also not a drug dealer. Call me crazy, but I don’t think my kids need to mainline sugar while wearing tin-foil partial dentures.

Enter as many times as you like, one comment per entry. (Even if you no longer need diapers at your house, they make a great baby shower gift). Deadline is Sunday night at 10 pm. I’ll pick a winner and get those diapers and a DVD to you asap. Whether you win or not, check out luvs.com on June 25th to get a special $5 off coupon. Have a great weekend!