I’m not very musical, despite the obligatory piano lessons in my tweens. But I wrote some words for Esther and Deborah verses for the Jesse Tree. Now for Abish to the tune of Army of Helaman . . .

The Lord commanded Esther to go and wed the king

Esther and Mordecai worked to save their lives

Esther was courageous and she would reply:

I will go, I will do, the things the Lord commands

I know the Lord provides a way, He wants me to obey. x2

As she served the Lord and lived in Israel.

She led them to battle with her friend Barak

They defeated Sisera who never more would mock.*

*Previous versions of this line included “Deborah knew Sisera would fall by Jael’s hand” and “They defeated Sisera as she did foretell.

Every birthday and Christmas for the past two years, I’ve offered to let Avery get her ears pierced. Every time she has declined, asking instead for books and swim stuff and roller blades and, this year, a punching bag. This morning we had a bra crisis (note: best to own at least two of the acceptable variety at all times) and ditched school for the mall, in search of the perfect under-t-shirt 32-A and new goggles.

Avery was wearing the clip-on earrings Nana brought from Florida this week, as she has every day since Nana’s visit. I mentioned she might want to think about the ear piercings, because the short pinch of pain in the beginning is worth saying goodbye to slow death by clip-on squeeze. It’s like the difference between tights and leggings, I said, except even better because regular earrings become even more unnoticable  once they’re healed.

She thought about it for awhile and I struggled between ensuring it was her choice and thinking we should seize the day before she got scared again. She chose the blue-green zirconium in the white gold post and gripped the arms of the chair tightly.

Tonight I asked her if she brought it up or I did. She remembers it being her idea, which is good, because as I stood there patting her hand, I was impressed that her eyes almost filled but she didn’t cry, she got quiet as she waited for the sting, and once it was over, I felt sick to my throat. While she was relieved and excited, I was filled with mother’s remorse.

I felt like a conspirator to the murder of my daughter’s childhood. It would’ve been easier if she hadn’t looked so grown up in that chair. I can’t even remember getting my ears pierced at eight. Compared to my period starting at thirteen and holding hands with Chris Hansen during a U2 laser light show at sixteen, getting my ears pierced was nothing on the child-to-woman continuum.

Except now I realize it probably was, that or the day I became aware of my underwear showing while doing a cartwheel. (I don’t remember that day, either, but having girl children of my own, maybe that’s first).

I’ll keep telling myself: it was time. She’s almost eleven. It was her choice, and now I don’t have to find a punching bag for Christmas.

I’ve always been too lazy to teach my babies sign language (well, and to learn it myself). Good old-fashioned grunting and pointing work for us. But at eleven months, Avery started curling her arm in whenever we prompted her to say please. We worried about her synapses until we realized we were offering her organic cheerios/diluted juice/twizzlers and then curling our own arms back into our bodies, witholding the prize, as we waited for her to manner up.

At fifteen months, Molly is more understandably verbal than the other kids. Meaning she can say Mahm! and Cat! and sometimes Dah! She can also follow simple directions and keeps better track of her hat, coat and shoes than any other person in this house. Her socks still get eaten by the dryer.

Several times a day she climbs into my lap, tugs at the bottom of my shirt and bobs her head cajolingly, eyes big and locked on mine, mouth in a wide expectant grin.

If only I thought her frequent flailing limbs connecting with my head were accidental. 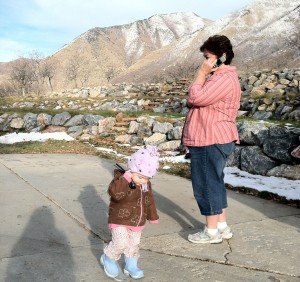 I was talking to my cousin for the first time yesterday. That sounds pretty lame, but I have about seventy first cousins and this was the wife of a cousin several years younger than me. She is almost due with their second child, and it turns out she is seeing the American Fork midwives like I did and that we have a lot of the same interests and hopes for natural childbirth (by which I mean “least-intervention-ed, un-epidural-ed” childbirth).

As I described Molly’s birth to her, I felt this warm wave of good feeling and my heart stood up and twirled around as I re-lived those moments last September. When I got up off the hospital bed, after pushing an 8 pound 15 ounce baby into the world, snuggling her at my breast, downing two celebratory and hard-earned percocets, and walked, all by myself, to my recovery room one floor down.

I haven’t felt that victorious, relieved, goddess-like, I-can-do-anything, show me a mountain . . . ever. Before or since.

Which tells me two things: 1) I need a new goal, some big, hard, rewarding thing, and 2) I need to do something in support of natural birth in the world. (even if that starts with something as small as this blog post).

My cousin is getting really close, and I was trying to think how to express my best encouragement. When I was fretting over my inconsistent mental preparations, it helped when Andrea told me her epiphany that there wasn’t any one thing she had to do and do right, but rather, she just needed to experience, to allow, to surrender. It helped to know that when I thought I couldn’t do it anymore, I didn’t have to because it was almost over, and I was already doing it anyway. It helped to know that by the time the pain was something I’d sell my soul to avoid, it’s too late to find a black market buyer. (and it was almost over.)

It helps me now, to remember that night and think: If I can do that, I can do anything. If I can do that, anyone can do that. And the thing about not doing it, but allowing it? That also helps for if things go wrong. If something goes wrong and intervention is needed and you have to allow something else to happen, something that wasn’t in your birth plan, that’s okay, because it turns out that was the thing you had to allow, to experience, to submit to. It wasn’t something you failed to do right, it was the thing that was supposed to happen. You can do this. Or that, or whatever you have to.

Giving birth to my baby, naked, lying on my side and indignant that I had to hold my own knee up and out of the way, feeling every stretch and burn and push and fire and thrust and swell and release, that was ecstatic. That was living deliberately, that was building my cabin in the forest by a pond, that was a luxury of wild nights! wild nights!, and squeezing the marrow out.

That was (every expletive you can think of) amazing.

What to read when you’re expecting

Thinking about natural birth after thinking I had miscarried

An old one that shows how far I’ve come